Home > Directors of Coaching at Flinders

Directors of Coaching at Flinders

A major focus at Matthew Flinders Anglican College is for every student to feel supported to have a go at their chosen sports.

Through sport, young people develop confidence and characteristics such as determination, resilience and sportsmanship.

These Directors of Coaching encourage our students to participate in sport and reach their potential. They also provide support to the many teachers-in-charge of sport and parents who volunteer as coaches and managers across the various sporting teams and affiliated Finders Clubs.

Each of the Directors of Coaching has experienced lofty heights in their chosen sports, and is passionate about sharing their skills, mindset and passion with young people.

The whole College community benefits from such positive influence as we all learn to build healthy habits for life. 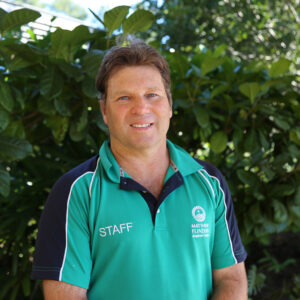 As a cricket player, Rod represented New South Wales in 39 First Class and 7 List A matches between 1993 and 2000, being selected primarily as an opening batsman but also a specialist short-leg fielder and part-time leg spinner. Highlights including scoring a century on debut versus Tasmania in November 1993, being awarded Cricket NSW Fielder of the Year in 1993/94 and hitting three consecutive centuries during the 1997/98 season. Throughout 20 seasons of Premier 1st Grade Cricket from 1985/86 to 2005/06, Rod accumulated over 13,500 runs and compiled a total 30 centuries.

As a cricket coach, Rod has progressed from Cricket Australia Community Level 1 Coach in 1985 to Representative Level 2 Coach in 1995 to High Performance Level 3 Coach in 2015/16. Between 2011 to 2018, Rod successfully led John Paul College’s Cricket Program as both Director and Senior First XI Coach. Highlights included coaching the JPC Senior First XI Cricket team to 6 consecutive Premiership victories in The Associated Schools competition from 2012 to 2017. Additionally, Rod coordinated and led overseas cricket tours to India in April 2013, the United Kingdom in June/July of 2015 plus New Zealand in January 2017. In December 2018, he successfully coached the Metropolitan East Schools 13-15 Years Boys Cricket team to win the Queensland Schools’ Championship held in Mackay.

In the capacity of Director of Coaching and Teacher in Charge of Cricket at Matthew Flinders Anglican College, Rod intends to establish an excellence program for cricket, which will complement existing Flinders Cricket Club and College-based teams. Additional development opportunities will be provided through establishing Talent Squad programs for identified senior and junior male and female players, incorporating specialist coaching as well as strength and conditioning training.

Rod will oversee additional cricket fixtures being added to the school calendar and scheduled against identified club and/or school teams where home/away matches can be played on an annual basis and the competitive rivalry is challenging. Rod will also look to provide further opportunities through organising quality coaching clinics scheduled in the school holidays, as well as coordinating future overseas cricket tours for Flinders cricket players (i.e. New Zealand in January 2021 and United Kingdom in June/July 2023). Coach education is a passion of Rod’s and it is also his goal to provide quality workshops, mentoring and upskilling opportunities for Flinders Cricket Coaches leading into each club cricket summer season. 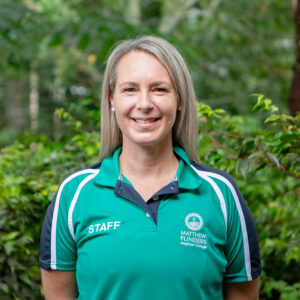 In her new role as Hockey Director of Coaching for Matthew Flinders College, Rachel's main aim is to encourage students to get involved in the sport of hockey and further develop a school-based competition on the Sunshine Coast to expose more students to the sport.

Growing up in Tasmania, Rachel was introduced to hockey at an early age which quickly developed into a passion she has pursued throughout her sporting life. In her early years she represented her state, both in the indoor and outdoor versions of the game, and captained her school to their first ever Tasmanian State Independent schools hockey title.

She then went on to play for Melbourne University Hockey Club in the Victorian State league, represented La Trobe University at National games, and Victoria in indoor hockey.

Moving back to Tasmania, she took on roles coaching teams in the Greater Northern league, which helped to found her love for coaching and giving back to the hockey community.

Rachel moved to the Sunshine Coast in 2012 and has been heavily involved in the local hockey community ever since. She has represented Queensland in the Masters age group several times and is one of few players to represent Australia Masters hockey in both indoor and outdoor versions of the game, winning a Gold medal in a the 2017 Trans-Tasman series in New Zealand and a Bronze medal at the Indoor World Cup in Hong Kong 2019.

At Flinders, Rachel is looking forward to working with all students, no matter their prior exposure to hockey, and providing them with opportunities and pathways to play hockey for Flinders as well as at a representative level. Rachel has a true passion and purpose for making Flinders the premier hockey school on the Sunshine Coast. 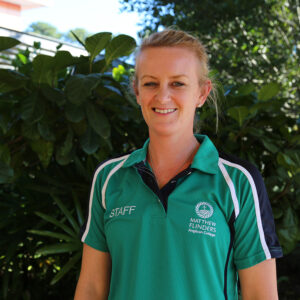 As a netballer, Lauren represented Australia as a member of the Diamonds from 2007 – 2011 and is a World Championship Gold Medallist and a Commonwealth Games Silver medalist. She played for the QLD Firebirds from 2004 – 2012 and Captained the team from 2010 – 2012.

Lauren has been at Flinders coaching and co-ordinating all College netball since 2014 and over this time has had many highlights including: 3 Primary Schools Cup Gold Medal winning teams; 2 Vicki Wilson Cup State-wide Championships and 2 QISSN Gold Medals as well as many success within all age groups in our Monday Night Schools Netball Competition here on the Sunshine Coast.

In her role of Director of Coaching and Teacher in Charge of Netball, Lauren encourages participation and enjoyment for all netballers of all abilities. She loves to encourage girls to be healthy and active in a team environment and to provide everyone an opportunity to excel in sport. She looks forward to contributing further in her role as Director of the Flinders Elite Athlete Program. Lauren to oversee the program and work one-on-one with the students to ascertain their needs and the support that can be provided to help them achieve within their sport and academically. 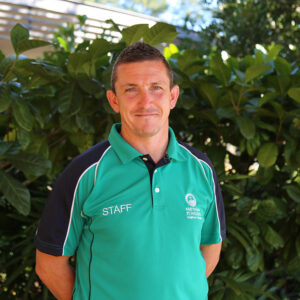 Paul Arnison played professional soccer in the UK for almost 20 years for teams such as Newcastle United in the English Premier League where he captained the reserve team for almost three years. While he did not break into the first team, which at the time included several world class and international players such as Alan Shearer, Peter Beardsley, David Ginola, John Barnes and managers of calibre such as Kevin Keegan and Sir Bobby Robson, he appreciated the opportunity to train and be coached by them on a daily basis.

In 2000, Paul moved on to his hometown team, Hartlepool United, where he made his professional debut at the age of 21, scoring for the first time the following week. Paul then played for Carlisle United for six years. Achievement included relegations, promotions, cup finals at the Millenium Stadium in Cardiff, Wales in front of 50,000 fans – a time of his life he will never forget. Unfortunately, his team lost to Swansea City that day but to play in a Big Cup Final in front of family and friends and thousands of screaming fans was a fantastic experience.

Paul left Carlisle United at the age of 30 and had a knee operation which kept him off the field for three months during that time. Paul was then picked up for Bradford City before moving to Darlington FC, his final professional club in the United Kingdom.

Paul had many highs and lows at Darlington. He says he could write a book with some of the stories from his time there. Paul says one of the best moments in his career was playing at the new Wembley Stadium (England’s National Stadium ) in a non-League Cup Final. Paul fondly remembers walking his two sons – who were club mascots – out alongside him. To then win the game in the last minute of extra time and to walk up the famous Wembley steps to lift the trophy just made the occasion that little bit more special for him.

In 2013, Paul and his family emigrated to Australia and settled on the Sunshine Coast. He coached and played at the Sunshine Coast Fire for three years, played for Noosa FC and then Caboolture FC. Paul decided to hang up the boots and give something back to this favourite game which has served him well from the age of 16 to the day before his 40th birthday.

Paul says, “In my Director of Coaching role here at Matthew Flinders Anglican College, I run training sessions during lunch time to get the kids out enjoying kicking a soccer ball around. In Terms 1 and 4 we have our SCISSA programs for both boys and girls and in recent times participation numbers have increased greatly. We are beginning to get great turnouts for training and that shows in the game play. We are now competing with St Andrews and Suncoast Christian College in grand finals, which demonstrates the great work from all soccer coaches/staff. I love my job coaching soccer. We have such great talent here on the Sunshine Coast and I get great satisfaction from seeing the kids enjoying football and playing with a smile on their faces.” 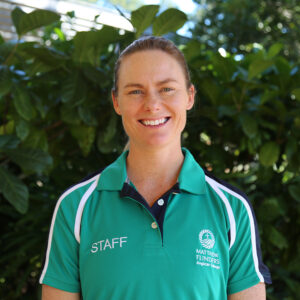 Growing up on the Sunshine Coast, Peta had a love for all sports but excelled in the sport of Touch Football.  She played at an elite level representing Australia from 2005 – 2015. Peta was Vice Captain of the Australian Women’s Open Team and Captain of the Queensland and Sunshine Coast Women’s Open teams. During her elite playing career Peta played in 3 World Cups and over 54 International games. She has also always given back to the sport in coaching roles.

She is a strong believer of sport complimenting students academia and general life skills by building self confidence, teamwork, discipline and self efficacy.  She looks forward to working with students of all abilities and providing a pathway for students to play Touch Football at an elite representative level. More importantly Peta wants to provide students with a positive sporting role model. 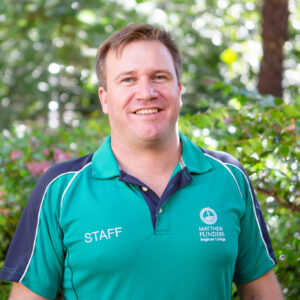 Duncan worked with the Queensland Academy of Sport as an Assistant Coach to their Men’s Water Polo program from 2008 to 2013. Through this program he worked with current and aspiring Olympians on skill development and game play. He also coached Queensland Junior programs to help develop athletes through the pathway programs.

Between 2010 and 2013 Duncan toured Europe with Australian Youth and Junior teams. In 2012 he was appointed Head Coach of the Australian Junior Men’s team to contest the World Championships in Szombathely, Hungary.

Duncan looks forward to increasing participation in Water Polo throughout Flinders and establishing pathways for students who wish to further their development in the sport. Central to the College’s program will be supporting the core values of Courage, Integrity, Respect and Compassion. 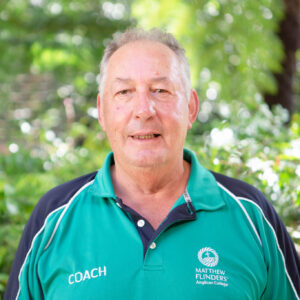 John Papahatzis joins the College in 2022 as the Flinders Director of Coaching for Rugby and Flinders 1st XV Rugby Coach.

John has a distinguished track record in school rugby, having helped develop talent such as Matt Giteau in Canberra and also coached the Australian schoolboys team.

Covid forced John’s retirement until he enrolled his grandson in the Flinders Junior Primary School in 2021. He is looking forward to mentoring and supporting students and staff at Flinders. 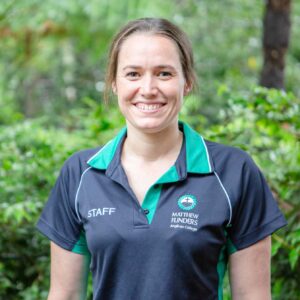 Matthew Flinders Anglican College welcomes Sarah as the Director of Coaching (Volleyball) and as a Secondary School Teacher on the Flinders staff team.

Sarah brings extensive knowledge of volleyball, gained through training, coaching and competing nationally. As the Flinders Director of Coaching (Volleyball), Sarah is excited to develop student’s skills and strategies, improve technique and ensure every player has the opportunity to achieve their potential.

Sarah was introduced to volleyball when starting high school in Victoria. She quickly began playing state-league volleyball and was selected to represent Victoria on several occasions as both a junior and senior athlete which led to her attending Australian youth selection camps. As an adult she had played state and premier level volleyball as both a setter and defensive specialist.

Sarah is passionate about building volleyball programs in schools that welcome students to learn and grow as athletes and young people.